Discover and learn all the places to visit and explore, what to see, when to see it, and exciting things to do. 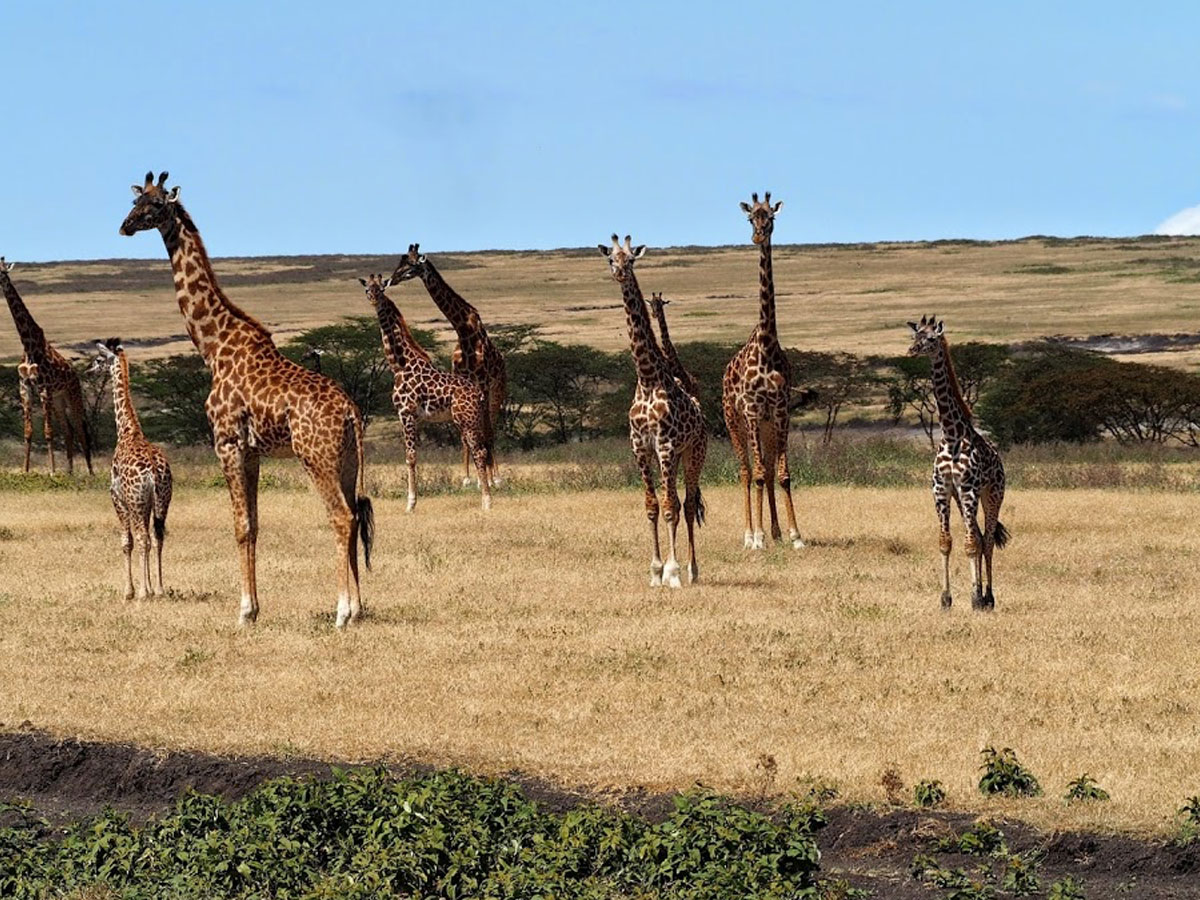 situated only about one hour away from Arusha town, is a great introductory choice if the guests have a few nights in Arusha before they begin their safari. While smaller in size compared to the others, Arusha national park does have its distinct charms, with varied landscapes that consist of the Meru Crater, Mount Meru, and Ngurdoto Crater, as well as the shallow alkaline Momela Lakes, which are often tinged pink with thousands of flamingos. There are two main game drive circuits around Momela Lakes and Ngurdoto Crater, so to cover the park in its entirety, along with the walks and canoe activities, we can arrange a full day to explore this park.

Though lacking in larger predators such as lions and cheetahs, the elusive leopards along with spotted hyenas may be seen during the early morning and evening. This park also boasts of the rare black-and-white colobus monkeys, blue monkeys, and colourful turacos and trogons. Other animals that are commonly seen are the African Cape buffalos and giraffes.

Guided Walks in the Momela Forest

This activity will be conducted by a park ranger, who he will walk you through the Momela Forest, where you will get to see the Tululusia waterfall, standing at 28 meters high, as well as encountering animals like buffalos, waterbucks, baboons, monkeys, and curious warthogs at a safe distance. This activity typically takes about 2-3 hours.

A very popular activity, especially for those who are keen to be outdoors, the scenic canoe safari on the small Momela Lake will enable you to see buffaloes, bushbuck, giraffes, hippos and many water birds living close to the water. Depending on the number of guests who book this activity, you may have the canoe guide with you, or he may be guided from another canoe. This activity typically takes 2 to 2.5 hours. 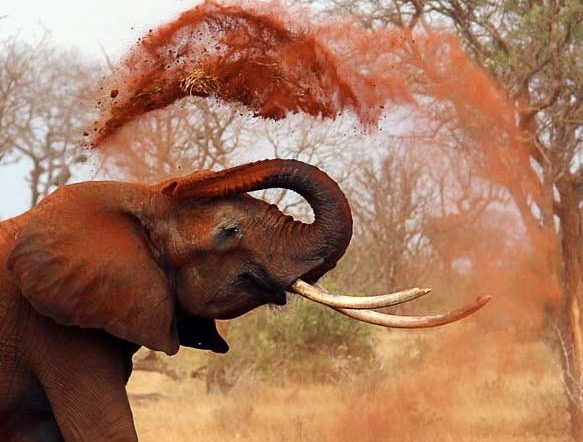 With a landscape and vegetation so richly diverse, this 6 largest national park in Tanzania is not to be missed. Named after its river, Tarangire National park’s wildlife concentration in the dry season is arguably just as diverse and consistent as in the Ngorongoro Crater, as large herds of elephants are drawn to the riverbed to quench their thirst, while other migratory animals such as wildebeest, zebra, buffalo, impala will gather the shrinking lagoons. Against the ever-so-picturesque backdrop of giant baobab trees and the hilly landscape, Tarangire is a majestically beautiful park to behold, with its own migration during the wet and dry seasons.

Oftentimes referred to as an ‘elephant haven’, Tarangire offers an up-close-and-personal experience with the elephants. Within a safe distance, our guests can watch large herds of elephants cross right in front of their vehicle, or witness these wondrous animals interact playfully with each other in the open. With an estimated 3,000 elephants in the park, Tarangire is said to have the largest elephant population in Northern Tanzania. During the dry season, up to 300 herds of elephants will scratch the dry river bed for underground streams with their extraordinary smelling abilities, and along with their strength to dig down to the water source, as a result, creates an abundant supply for other animals in the area.

The Tarangire River also attracts an impressive diversity of wildlife such as the migrating herbivores (zebra, wildebeest, buffalo), as well as the resident herbivores (impala, gazelle, oryx and gerenuk, bushbuck, waterbuck, dik-dik, warthog, and reedbuck). Larger predatory animals such as lions, cheetahs and leopards can also be sighted with more time spent inside the park, with our guides taking you to the farther interior and exclusive areas of the park. African wild dog sightings can be rare, but they have recently been spotted in different areas in and near the national park.

There are approximately 550 bird varieties that can be found in the swamps, making this the most breeding species in one habitat in the world. One of the main attractions for birders would be the variety of raptors that can be found within the park, such as the bateleur eagle, tawny eagle, martial eagle, fish eagle and spotted eagle owl. Other birdlife includes the Kori bustard, the stocking-thighed ostrich, as well as ground hornbills. For keen birders, the ones to look out for would be the colourful yellow-collared lovebird, rufous-tailed weaver and ashy starling, which are all endemic to Northern Tanzania.

This is a fantastic way to discover Tarangire in a completely different setting compared to daytime game drives! For this activity, you will be in an open vehicle with a driver, and local Maasai to spot the nocturnal animals such as porcupines, genets, bush babies, and the occasional hippos and leopards who hang about at night. 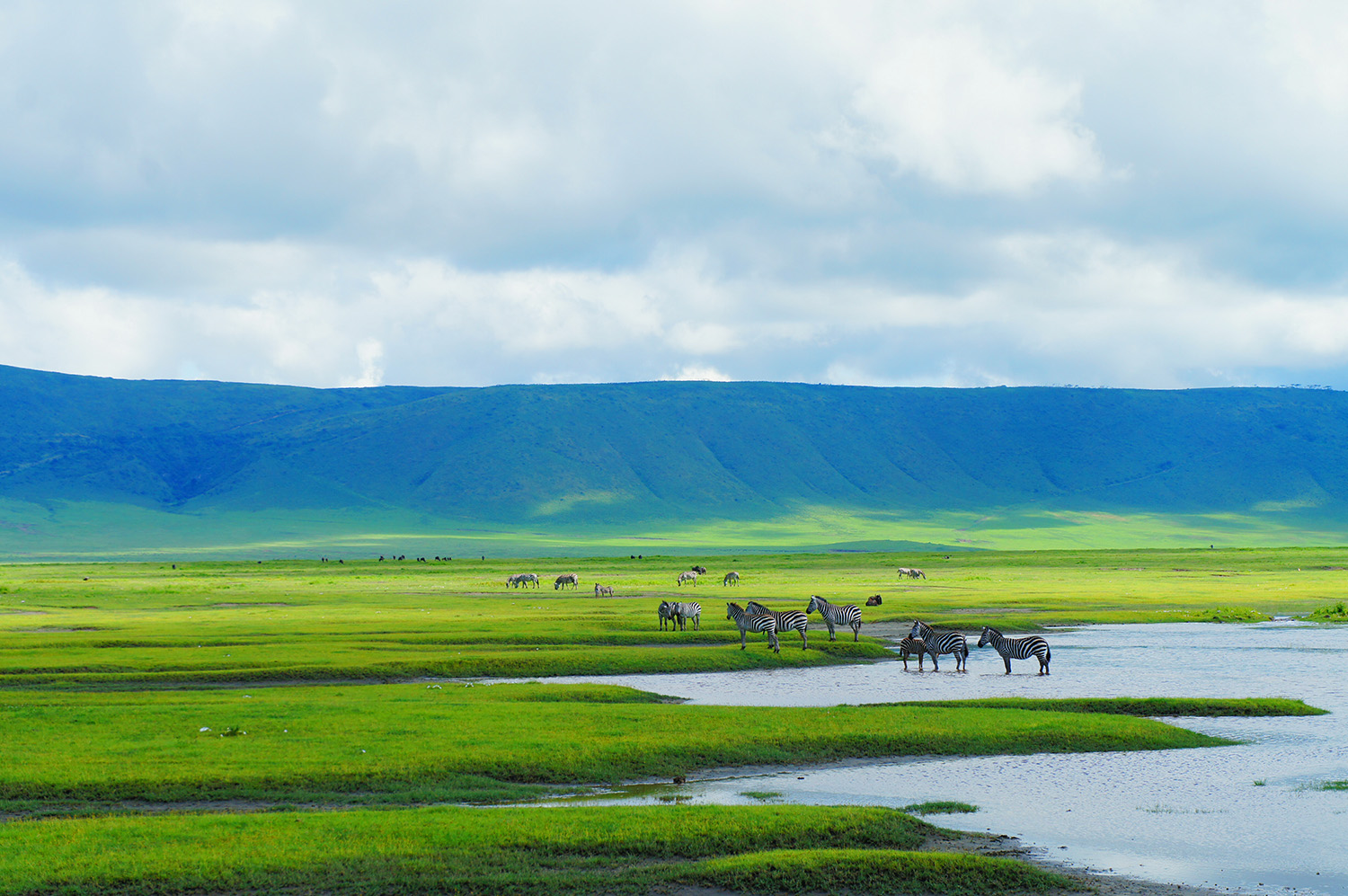 The Ngorongoro Crater is the world’s largest intact volcanic caldera, and it is said to be one of the most extraordinary natural sanctuaries for some of Africa’s densest large mammal population, approximately 25,000, with the highest density of mammalian predators in Africa. Also known as the 8th Wonder of the world, its ecosystem, consisting of a delicate balance of mutually dependent living creatures (herbivores, carnivores and scavengers), allows the Maasai people and the animals to dwell together.

Ngorongoro Conservation Area is rarely absent from our guests’ safari itinerary, as it is considered to be one of the main highlights of the Northern Circuit. The Crater Floor is simply a photographer’s dream; where the wildlife is prolific, set against the dreamlike backdrop of the Crater wall.

This is a popular activity that is typically arranged on the day before you descend to the Crater’s floor for game drive. As most of our guests do choose to stay on the Crater’s Rim, they oftentimes request for a guided walk in the afternoon, which will allow them to stretch their legs, and to see wildlife on foot. The commonly seen animals around the Crater’s rim are elephants, African cape buffalo, as well as smaller antelopes in the area. This activity will be guided by a park ranger along with your safari guide. 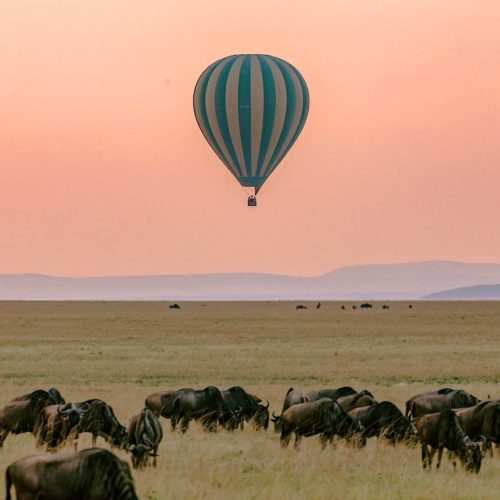 The Serengeti is one of Africa’s most renowned and captivating wildlife viewing areas. The variety of habitats included in its pristine ecosystem guarantees a versatile safari filled with excitement and feelings of African authenticity. During any time of the year, the Serengeti encompasses the highest wildlife census out of all national parks, including both resident and migratory animals. It is also home to the Great Migration, which entails the annual journey of grazers such as the wildebeest, zebras and gazelles as they relocate for greener pastures. The name Serengeti derives from the Maasai word ‘Siringit’, which translates into ‘the place where the land runs on forever’—a most fitting description for this beautifully unique park in Northern Tanzania. At 14,763 sq km (5,700 sq miles), the Serengeti National Park is home to the highest density of large predators, and a host to the indisputably most impressive natural event: the annual migration.

The 4 Seasons and The Great Migration

What makes the Serengeti such a formidable location for game drive throughout the year, is its distinct seasonal changes that shape the migration’s pattern. From late November to December, the migrating herds arrive on the short-grass plains of the east and south of Seronera, which also extends into the Ngorongoro Conservation Area—also known as the Ndutu Plains. This is the prime location to be when the calving season takes place, where large herds of wildebeests and zebras gather to give birth simultaneously, and in turn triggering thrilling game hunting for the larger predators. Until late February to March, the herds will remain on the plains, feeding on the short and new grass, which is filled with valuable nutrition for lactating mothers.

From the end of March to April, the herds will begin to move west as they prepare for their migration toward the north. By May until mid-June, the migrating herds are expected to pass through the Western Corridor, making the Grumeti River a spectacular sighting: a small migration crossing alongside the fiercely aggressive Nile crocodile.

The dry season begins from the end of June to July and lasts until the beginning to mid-October, where the herds will concentrate in the Northern Serengeti, making the Mara River one of the most popular destinations to see the great river crossing. With poignant scenes of confusion and panic among the herds, alongside the successful crossing that takes place, this marks one of the most spectacular natural events in the world.

By the mid to end of October, the herds are heading back South again, through Western Loliondo and Lobo area, as the animals return to find the fresh, green shoots on the short-plain grass.

For many of our guests, flying over the Serengeti in a hot air balloon is on their must-do list. The experience of witnessing the “endless plains” and the diverse wildlife from the sky will mark your safari as unforgettable. After your flight, you will be treated to an “out of Africa” breakfast, served with sparkling wine, as you watch the plains in all its morning grandeur. 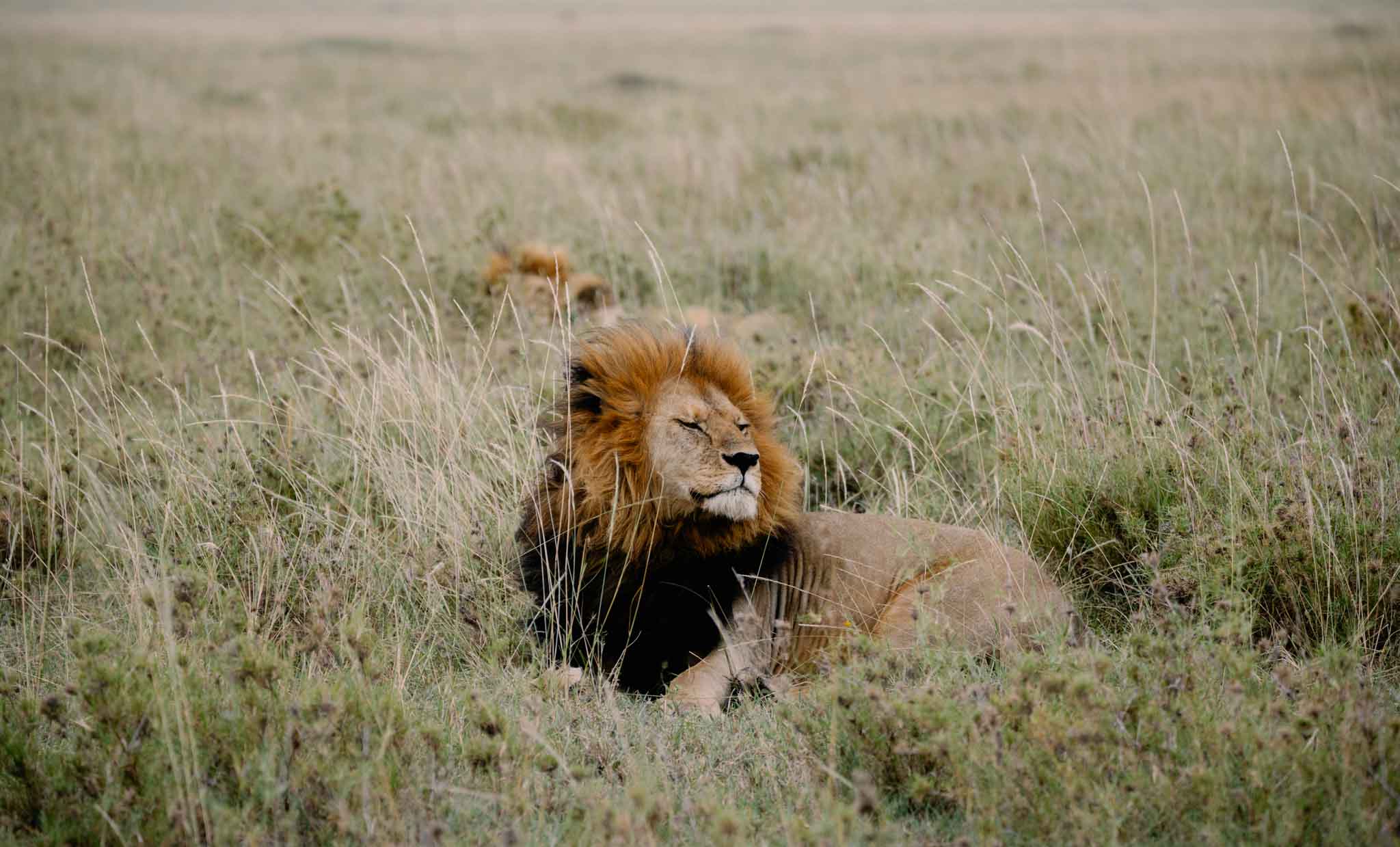 Guided Walks in and around Lake Manyara, Mountain Biking

Lake Manyara, with its scenic tropical rain forest-like environment, is a unique, relatively small national park that boasts a diverse collection of water birds, along with other exciting wildlife. Situated in close proximity to Arusha town, as well as a short drive from Tarangire National Park, this is a common destination for a day visit, and perhaps a longer stay for avid birders. Aside from the resident animals in the park, Lake Manyara is a must-see for its varied landscape, consisting of a groundwater forest, acacia woodlands, and grassy floodplains and not to mention the lake itself. It is a short two-hour journey to cover the park’s ground, and it is indeed a destination worth exploring in your Northern Circuit itinerary.

During your visit to Lake Manyara National Park, you will likely encounter the resident herbivores which include elephants, hippos, giraffes, wildebeest, buffalo, impala and warthog. Large groups of primates such as baboons, velvet monkeys, and the rare blue monkey can also be seen during game viewing. While there are larger predators that lurk in the park, such as leopards and tree-climbing lions, they are harder to spot when compared to parks like Serengeti and Ngorongoro.

A true birder’s paradise, Lake Manyara is home to more than 400 species of birds, including waders, water birds and tree dwellers. One of the major highlights has to be the great flocks of pink-hued flamingos that make for an unforgettable sight. The best time to visit the park for the flamingos would be in February and March, as well as the end of July to August.

Guided Walks in and around Lake Manyara

For those who are more outdoorsy, and prefer to incorporate more hiking/walking activities in their itineraries, Lake Manyara is a great location for these types of activities. A “Nature Walk” is a leisurely trek near Lake Manyara with a guide, and this can take from 1 to 1.5 hours. A “Forest Hike” is a more physically strenuous activity that requires relatively good fitness, a pair of sturdy hiking shoes, as the trail can be quite steep. This typically takes between 2.5 to 3 hours.

Prepare yourself for an exhilarating and thrilling experience—to bike in the Lake Manyara region! This involves an easy cycle ride down the Great Rift Valley wall, and you will also pass through the farming villages of Mto wa Mbu. You’ll also be able to bike through some of the Manyara groundwater forest and between small herds of animals on the lakeshore. This activity will take between 2.5 to 3 hours.

Get started on your safari adventure!