This past February, our team finally got the time for a 6 days/5 nights Safari to Western & Central Serengeti, Ndutu, as well as Karatu, for new properties inspections. Thankfully, we did manage to sneak in some game driving time. And here are some of our highlights….

Our first leopard sighting was in Central Serengeti, though animals were scarcer compared to Ndutu, the “big cats” presence did not disappoint, and we were happy to find a leopard mother with her cub on a tree. It was from a bit of a distance, and we did not bring the best of camera lenses, so no picture to show for this one.

In Western Serengeti, on our way to Mbalageti Safari Lodge, we spotted two skittish young female lions who laid low near the high grass by the road. We managed to finally see one get up, and walk a few meters, before laying down again. First close lions we spotted, and were glad that Western Serengeti wasn’t completely empty, even during low season for that area. And of course, how can we go to Western Serengeti without passing by the Grumeti River! Luckily for us, there were no other cars around while we gazed on two nile crocodiles. There were a few baboons nearby, which could’ve easily been interesting game, but the crocs were obviously full and rather lay on the ground, maybe observing the Safari Infinity jeep for a more interesting game!

In Ndutu, the prime location for January – March (even April is good in Ndutu, if one doesn’t mind the occasional rain), was where we had the best game drives. On our way in, before we headed to Ndutu Ang’ata Camp, we spotted lions again, just lounging around. This group consisted of a lioness mum, along with her two cubs, reaching almost the same size as her! 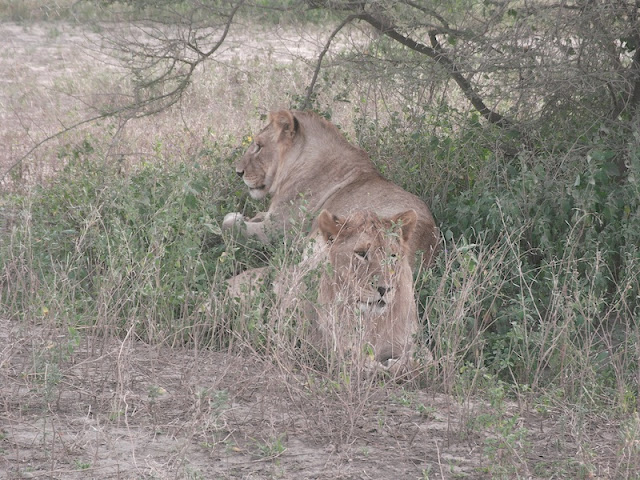 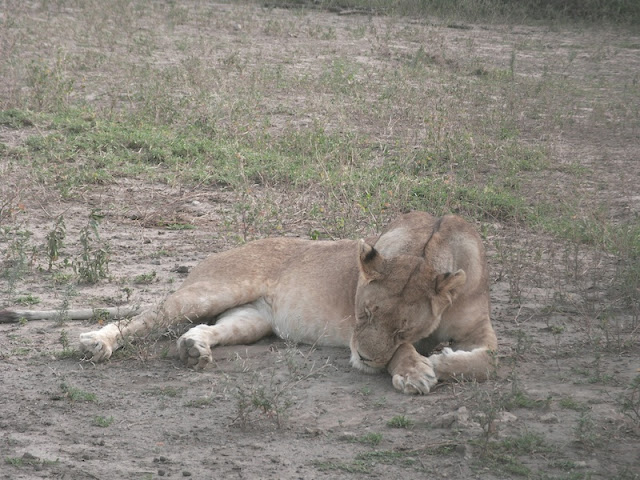 And, also in the Big Cats family, cheetahs are also hard to miss in this season, and especially in a location as great as Ndutu. 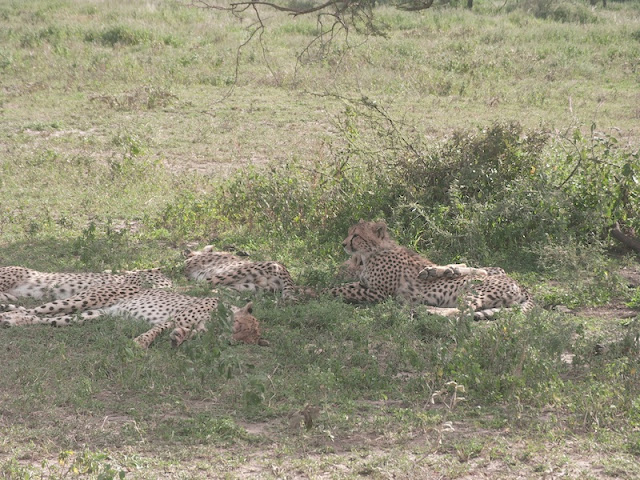 Right before we reached camp, we stumbled upon 2 buffalos drinking at a nearby waterhole. One didn’t look too happy when we got a bit too close to them. 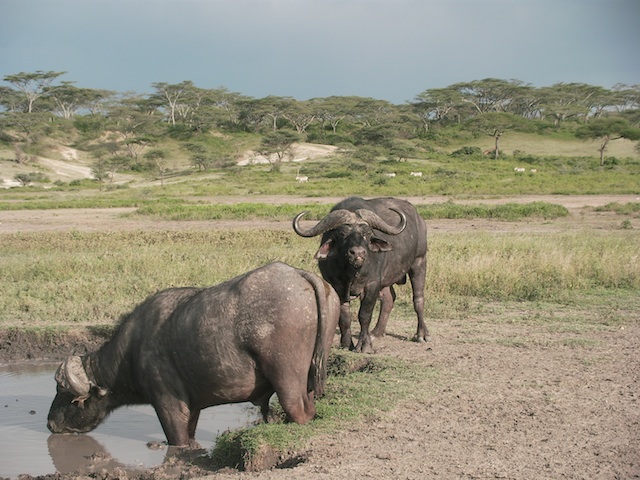 We spent the night at the Ndutu Ang’ata Camp, a semi-luxury canvas camp, with an amazing staff team who are so kind and helpful throughout our stay. Their food was also one of the top best ones that we had…! The next morning, we woke up by 5am, got our breakfast boxes, and went out for an early morning game drive (highly recommended if you’re staying inside the park/conservation area). And, seeing the Ndutu sunrise, it was definitely worth it. 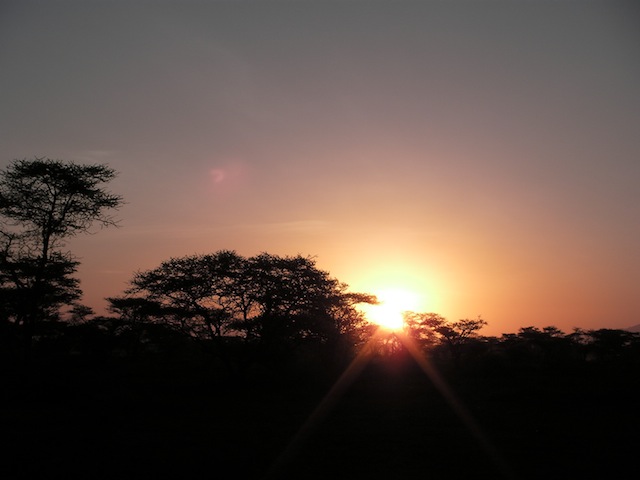 The first highlight of our Ndutu day was a group of 3 hyenas feeding on their fresh morning kill, an adult wildebeest. We were about 10 meters away from the scene, but we can see it pretty clearly, especially with the wildebeest’s stomach out.. with fresh grass spilling from it (probably his breakfast!)… 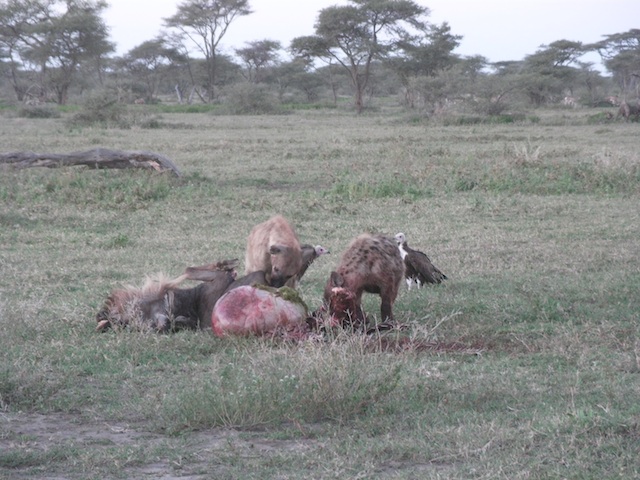 After our breakfast box, and an unsuccessful attempt to find some lions, Simon had spotted two specks of what looked like “cats”, so we rushed over there right away… to our surprise, we found TWO full-grown leopards, ON THE GROUND. 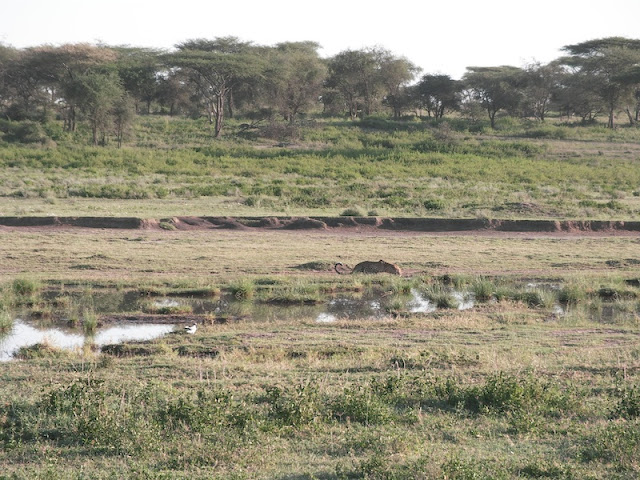 We were separated by a small gorge, and just enjoyed the view from the other side… for a while. After roughly 5 minutes, they started crossing, and walking towards us. 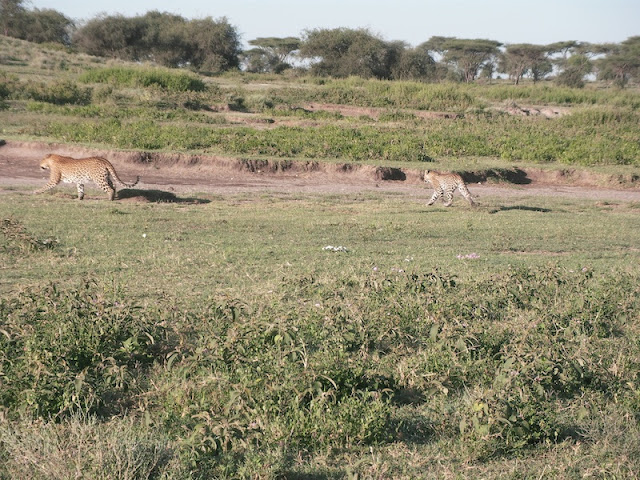 (This is them walking around the gorge.. and eventually towards SAFARI INFINITY jeep) 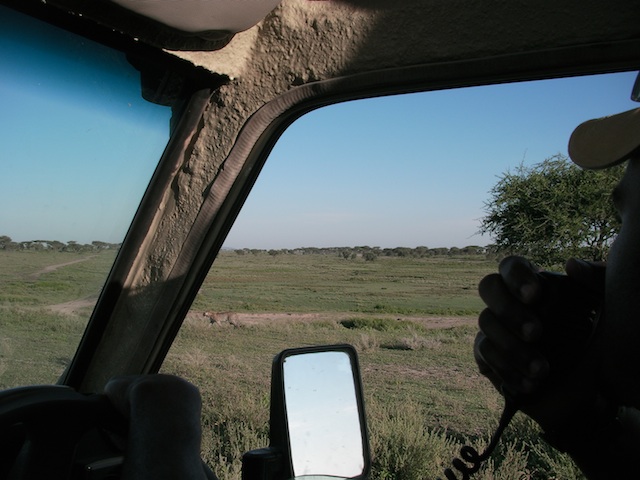 (Here is Simon, waiting patiently for the cats to come closer to our jeep)
And in the beginning, we thought the two leopards were actually a mum and cub, but as we got closer, we realized that they were a COUPLE! The male leopard wasn’t too happy when we approached the female, and he stopped in his tracks and stared at us intently. 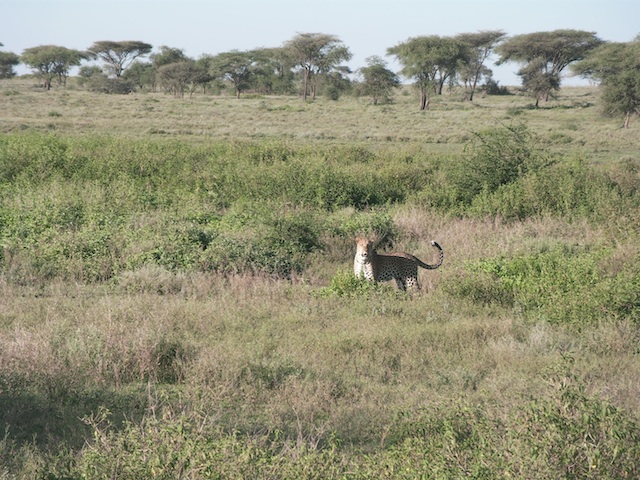 Here is the male leopard, eyeing us, at only 5 meters away. 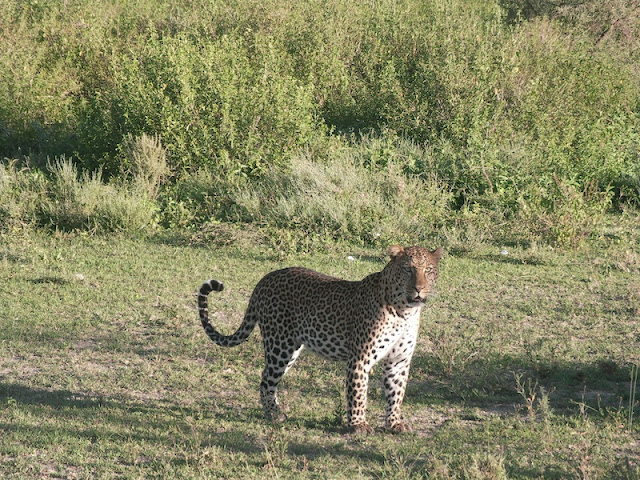 Funny thing was, we had the roof popped up, and when the leopard started coming towards us, looking as if it was about to charge, we all had to quickly get off our seats, and close the roof as fast as we could. Sure, we had a laugh about it afterwards… but it was not a happy leopard. 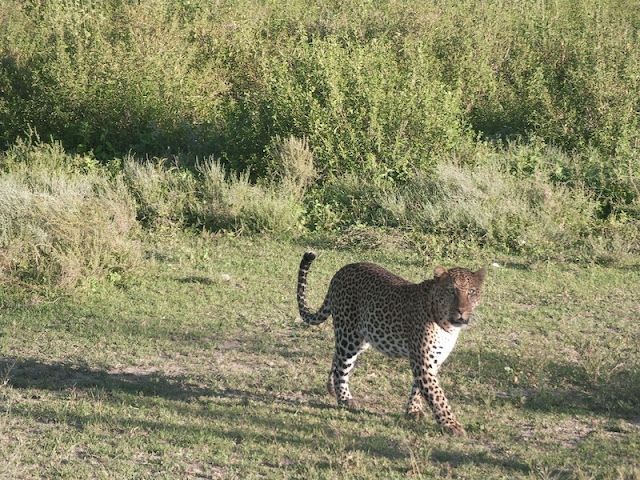 After we slowly backed off, the male leopard finally went on his way… 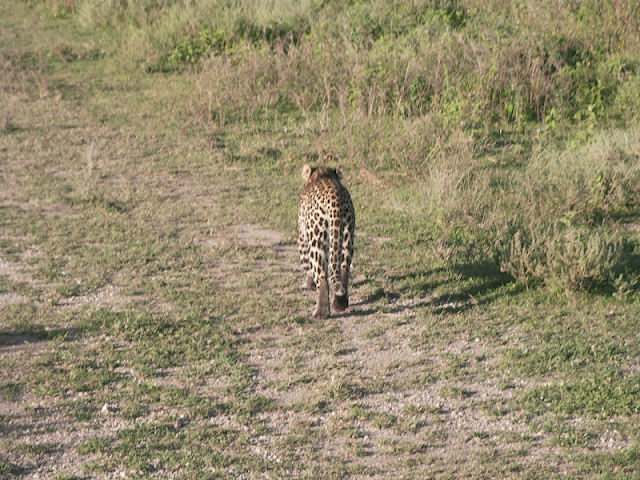 We waited around a bit to get more glimpses of the two leopards – and this was a good 30 minutes with just the Safari Infinity jeep, so we thoroughly enjoyed our private viewing 🙂 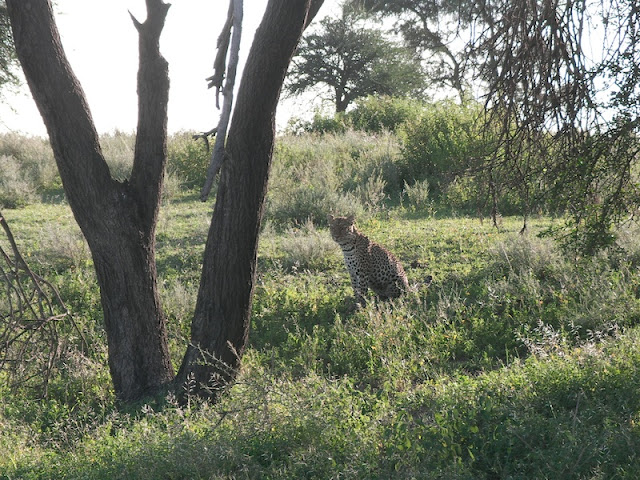 And when other jeeps arrived in the area, we warned the drivers that the male leopard was very aggressive, so they had to keep their distance. I don’t think the drivers took heed of our advice, because after an hour, we heard them on the radio, all jumpy, because one of the jeeps was chased down by the aggressive male leopard…

The next “Ndutu blessing” we had, was the large herd of wildebeest, with countless newborn at their mothers’ side! What an incredible view. 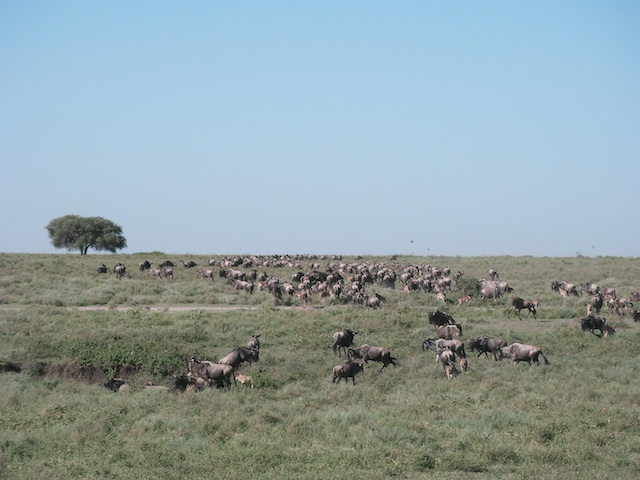 On our way out of the park, we spotted a few tired giraffes 🙂 This is how they sleep, by the way. 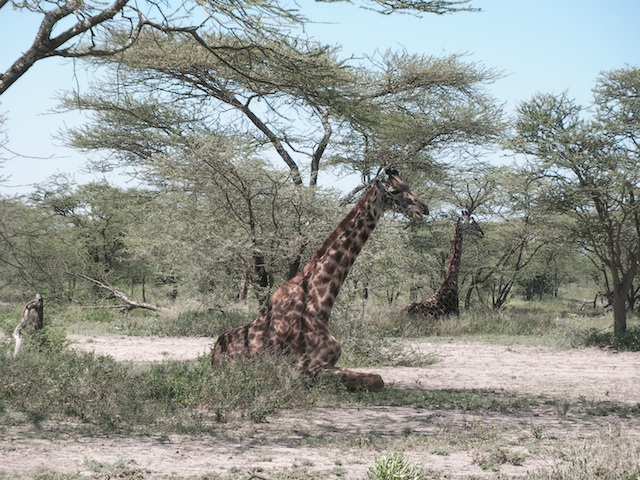 All in all, it was an amazing and highly successful game drive (less than 6 hours out in Ndutu), and we can’t wait to go back again.